Nicola runs the London Marathon and raises over £4,000

Affinity Law Director, Nicola Kitchener, recently ran the Virgin London Marathon and raised thousands for charities. Here’s what she had to say about after the event: 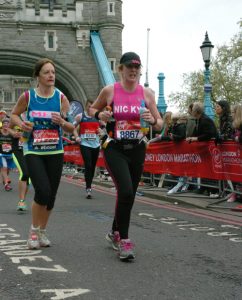 “Since setting up Affinity Law in August 2008, working all hours has had a detrimental effect on my health such that in August 2014 I had a job to walk up a (rather steep) hill in San Francisco  with my Daughter saying “come on Mummy, you can make it!”.  At this point I realised I was going to have to alter my work/ life balance and so made what friends have considered to be a crazy decision to enter the Virgin London Marathon.

After securing my place in October through the ballot I set about buy topamax drug training which involved two 6.30 am dark winter starts midweek and a long run at the weekend in the rain, ice and snow.

I completed the Marathon which was an awesome (but painful) experience.  I am now addicted to running and am planning to run the Loch Ness Marathon on 27th September 2014.  In addition, I intend to enter another European Marathon next year to celebrate my 50th Birthday.

My fundraising was for the Child Brain Injury Trust, a charity that supports children and their families with brain injuries and the NSPCC.  I raised over £4,000  for the charities.

Running is the best stress busting activity and I would recommend it to everyone.  What are you waiting for, get your trainers on!”

This site uses Akismet to reduce spam. Learn how your comment data is processed.